Over the course of 3 years, we have flown LOT Polish Airlines over 10 times. These were short haul EU flights connecting at Warsaw Chopin airport with domestic flights.

Our European flights were carried out by Embraer 170/175/190 jet aircraft, which is the preferred regional aircraft by this carrier. Although planes are clean, the aircraft are getting older. The load factor was rarely above 80%, so in a number of occasions we enjoyed free seats next to us. Embraer 190 has a 2 by 2 seats configuration per row. LOT flight attendants are not among the smiliest on the planet, but do the job well. Free water and sweets are served on board, coffee and sandwiches are paid.

On the domestic routes, some flights were served by Embraer 170, but in most cases, Bombardier Q400 propeller aircraft were used. These aircraft accommodate 78 passengers, and while they are believed to be of economic value for short flights, we should say, they are rather uncomfortable for the passengers. These aircraft are slower than the jets, cannot be air-bridged, but their biggest disadvantage is the noise they create. It is hard to maintain conversation with co-passengers in the cabin. Poland is a flat country and all the domestic airports are modern with long runways, capable of serving large jets. There is considerable passenger traffic too, so we can’t quite understand why propeller jets are used so largely. 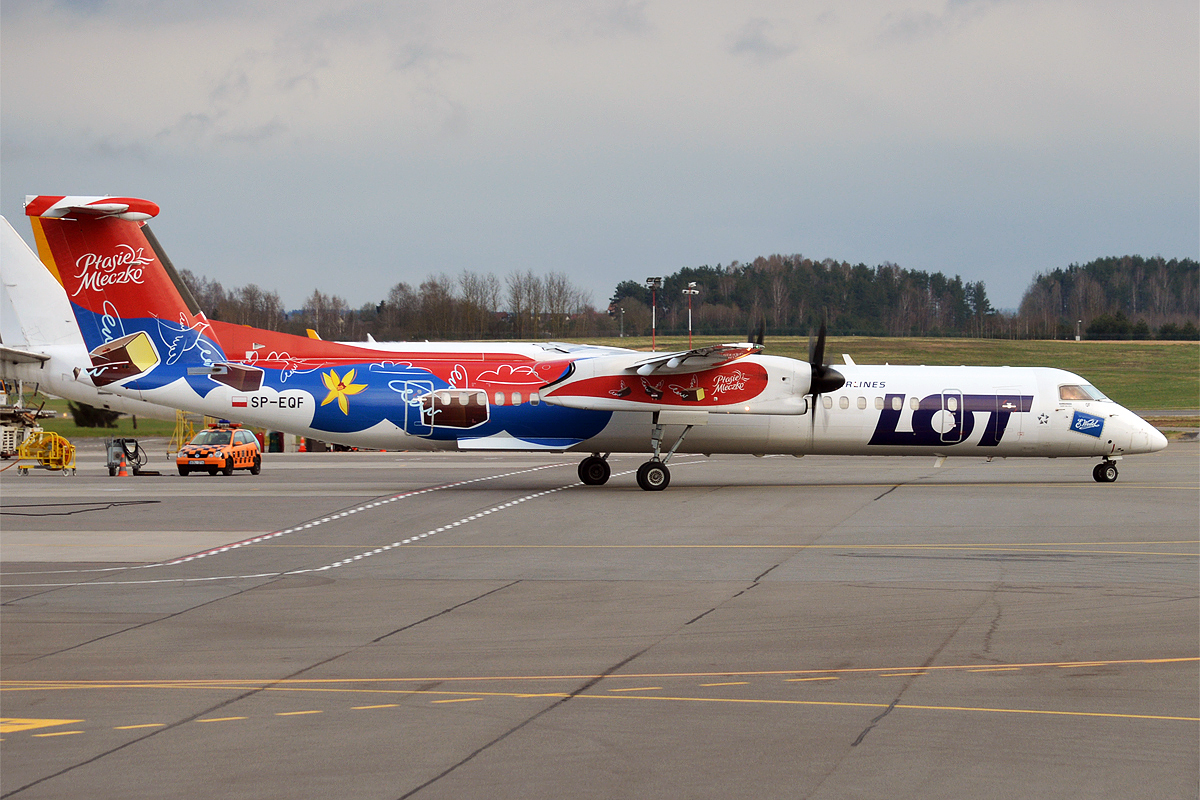 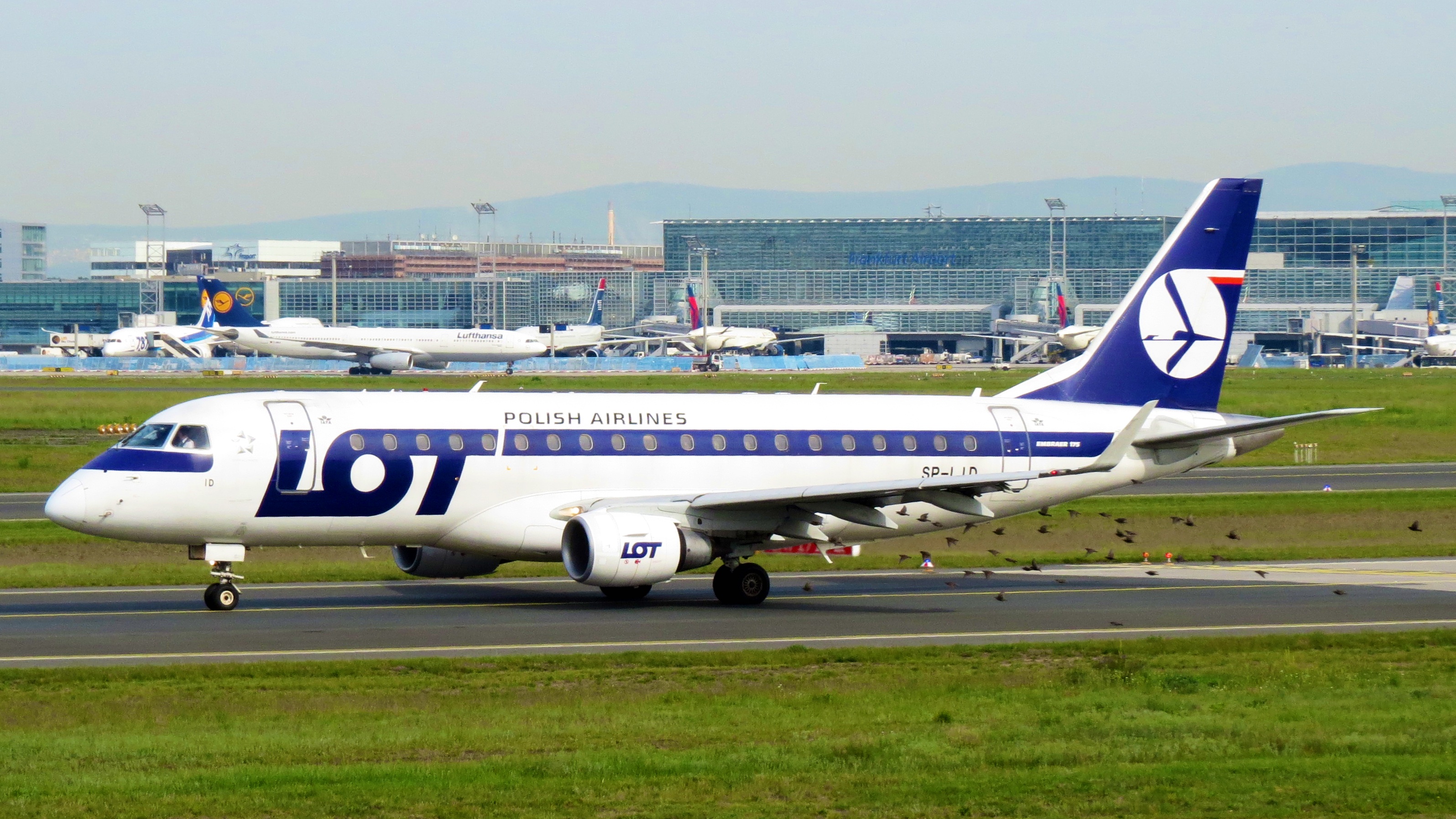 All flights of LOT were operated to and from Warsaw Chopin Airport (WAW). This was our transit airport, where we changed flights. We experienced transfers as short as 35 minutes along with long layovers of 5h+. We would qualify the Warsaw airport as rather basic, falling behind the major hubs in the region, such as Munich, Frankfurt, Vienna. The transit area has a rectangular shape with gates all along. It takes around 20 min to walk from one side to the other. One of the corners is dedicated to non-shengen flights, where you pass thru immigration. If you end up there, choice of shops gets limited to 3-4. We did this mistake once and ended up spending 2 hours in a place without any amenities.

On the occasion where we had a waiting time of 5h+, we decided to exit the transit area and get to Warsaw. Access is rather easy, with a public bus leaving to city center just outside the arrival area. The trip took as about half an hour only in a packed bus, but overall the experience was worth it, as it costs almost nothing. We had the chance to spend 3 good hours in the city before returning to the airport with the same bus.

Most issues we had with the short connections. Once we arrived at a gate (via airbridge) at the corner of the transit area and had to run for a flight departing from the opposite corner (non-schengen), it was quite a walk garnished with a passport control queue. Another unpleasant experience we had, when we arrived from non-schengen country and were bused to the airport. They made us go thru security screening, which took over 40 min. Our connecting flight was a sure miss. Our persistence in skipping the queue saved us.

One thing we never understand - there isn’t a clear rule at Warsaw when you are bused and when you are air-bridged. Bomardier propeller aircraft don’t fit on the bridged, so these flights are always bused. It means being at the gate for boarding 30 min before the flight steady, as buses leave 10-15 min before departure. The bridge allows you for more flexibility.

In terms of amenities, the transit area has the basics, some duty free shops, some bars, some weird wifi system, etc

Our overall experience was OK. The ground handling staff at Warsaw Chopin airport seems relaxed in a way, and flights would depart with a standard delay of 10-15 min. This was somehow absorbed by the flying time, so that upon arrival the plane would be on time (not earlier though). There was one case of a delay of over 2 hours, that being caused by a heavy snowfall. On another occasion, a flight got delayed with about an hour for unknown reason. No flights were cancelled, diverted, no problems with overbooking. LOT airport staff did their job well - nothing extraordinary, neither good nor bad.

The essentials were in place - flights were carried out in a way that made connecting possible. The details however are missing - there is no assistance for transit passengers at all - no clear information of the gates, slow security checks at the non-shengen transit corridor, no LOT Airlines staff at or near the arrival gates to assist passengers with short connections. On one occasion, we had a transfer time of only 35 min, yet no one cared to give us priority at the queues. On one occasion we missed our domestic flight due to bad weather, which made us visit the transit counter, situated in the middle of the transit area. At the counter we were given boarding passes for the next LOT domestic flight (in our case 3h later) and a voucher for a sandwich and drink. On the positive side, they knew were going to miss our connection and automatically rebooked us on the next available domestic flight.

We think that other European airlines do much better job in handling connecting passengers.

In terms of handling, generally, our baggage arrived at final destination in good order, with small exceptions. It was shipped next day a couple of times as due to delays limiting the connection time, baggage didn’t make it. This however could happen at any hub airport, so we wouldn’t label Warsaw International airport negative in this respect.

Overall we reached our final destinations in good order and as expected. Though, uur transfer experience at Warsaw airport was not stress free. The airport itself is nothing spectacular, with few to do. Same goes for LOT aircraft and customer service. Just the basics! If it is your only option, go for it, you will get there!