Fly Dubai (FZ) offers affordable fares to Dubai from Eastern Europe, Russia, the Middle East, Africa and some Asian countries, totalling around 100 destinations. Naturally, it also links these regions to each other via its hub at Dubai International Airport. Operating narrow body aircraft, Fly Dubai is also a sort of feeder to Emirates.

Aircraft & on board service

Fly Dubai operates a fleet consisting of Boeing 737 aircraft (800 series including 6 MAX8). While the MAX 8 are state of the art, they are just entering the fleet and you still have a slim chance to fly on such.

There is an entertaining system on board (in our view rather bad), which is on-demand.

The on board service does not offer meal in economy class, but you can pre-book such from the website. Most fares include checked baggage and it is not the policy of the airline to operate out of shaggy low cost terminals.

Below is the route map of Fly Dubai, as presented on airlines website: 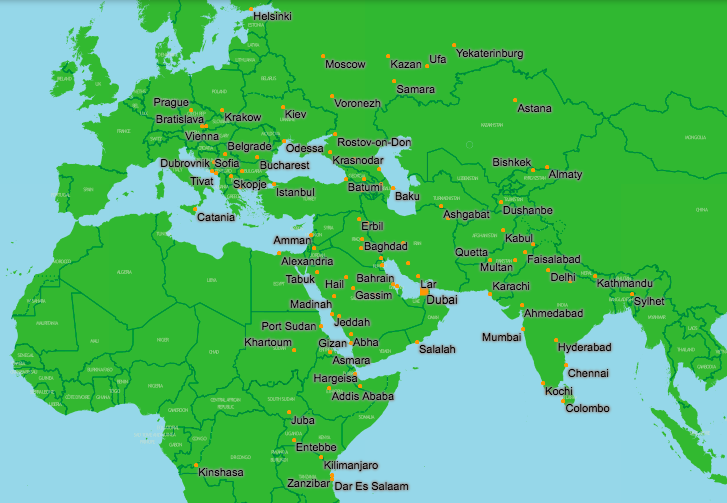 All the above destinations are connected to each other via the Fly Dubai hub at Dubai International Airport (Terminal 2)*. Terminal 2 is like a separate small airport, located on the other side of the apron, opposite the Emirates terminal. It is a very basic, truly low cost facility. It resembles the structure of a large hangar or supermarket. The transit area is full of seats (no place to sleep or rest) and quite noisy. On the positive side, connections happen quickly and you don't need to pass thru immigration. Here you can see a map of the facility.

*As of December 2018, 10 of the routes will be moved to Terminal 3. The affected cities are Belgrade, Bishkek, Bucharest, Catania, Dushanbe, Helsinki, Krakow, Prague, Rostov-on-Don, Salah.

Let's look at the schedules. We picked a random connection from Prague (Europe) to Colombo (Asia). 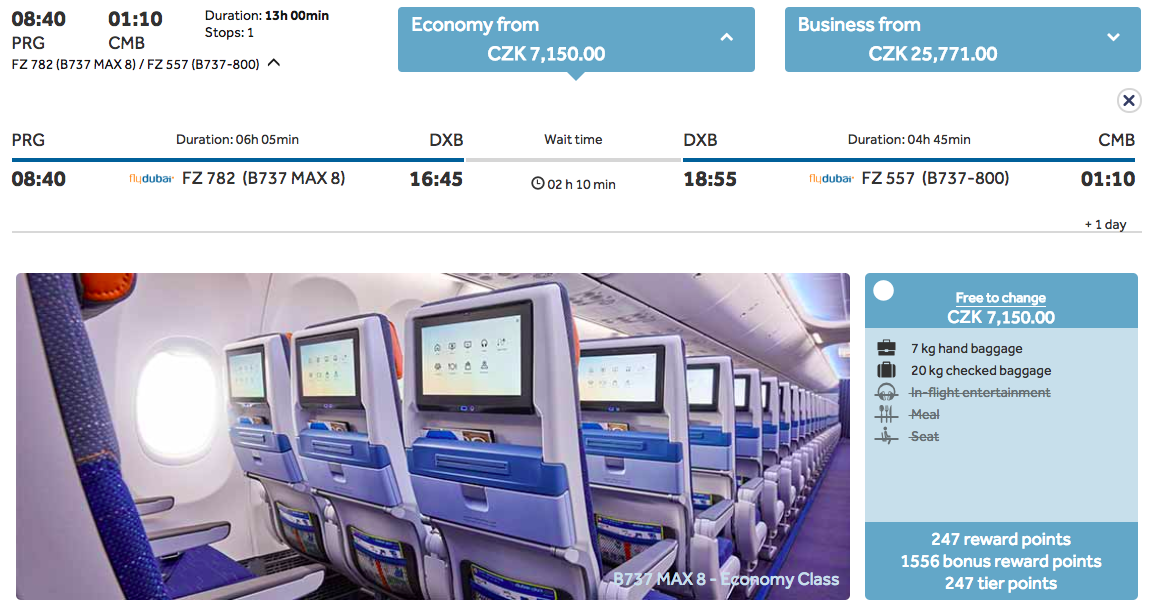 The customers on the above flights will enjoy the new Boeing 737 MAX8 on the leg from Prague to Dubai. Currently there are only 6 aircraft of this type in the fleet, so in a way they are lucky. The good part of the connections with Fly Dubai is that due to the geographical position of Dubai and the usage of narrow body aircraft, the average flight duration is around 4-6 hours, so the connecting flight trips are split in halves - you don't spend too much time up in the air. In the above example the waiting time in Dubai on the way to Colombo is only 2h10min, which is ideal, but on the way back it is nearly 18 hours, and there are no other flights permitting shorter connection. Spending so much time in any airport is killing, but in Terminal 2 we think is totally unbearable. Our recommendation is to book a hotel near the Dubai airport.

Our impression is that not all destinations are served with high frequency, which makes long connecting times (like in the above example) common. But on the other hand, fares are what makes Fly Dubai so attractive, so if Fly Dubai can take you to your dream destination for $ 200 less than a traditional airline, yes, it makes sense!

Let's look at this screenshot:

The fare structure is rather good, as the "free to change" , whcih includes checked baggage is commonly offered on the long haul flights (such involving connections in Dubai). Business class fares are very good and cheaper compared to peer airlines. Often the airlines advertise business class promotions.

Fly Dubai is a low cost airline with some flair of luxury, but the biggest problem we believe is long connections at Dubai terminal 2. Anything over 5 hours will be hard to endure.

For Fly Dubai connections involving Emirates, you may look into this article.